The chessboard is made up of 64 squares (8 x 8) of alternating colors. For tracking purposes, the squares are numbered one through eight vertically and A through H horizontally. Please see the board on the right. Notice the numbers and letters indicating the identification of each box on the board as illustrated.

The Chessboard should be positioned where the white square should be at the bottom right of each player. The player who is playing white should have his Rook on the "H1" square and The player who is playing black's rook should be "A8" square. The Queen always is positioned on her color, hence, the white Queen on the white square and the black Queen on the black square. Then, both Rooks go on each end square, the Knights go inside of the Rook squares, the Bishops go inside of the Knights and the King fills in the last remaining space on the first row. Then the eight paws are placed in front of each piece on the second row. 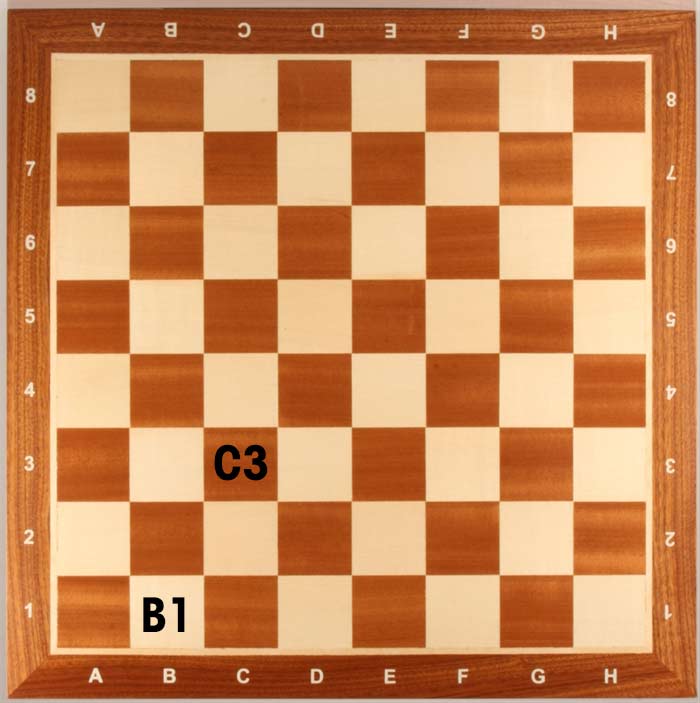 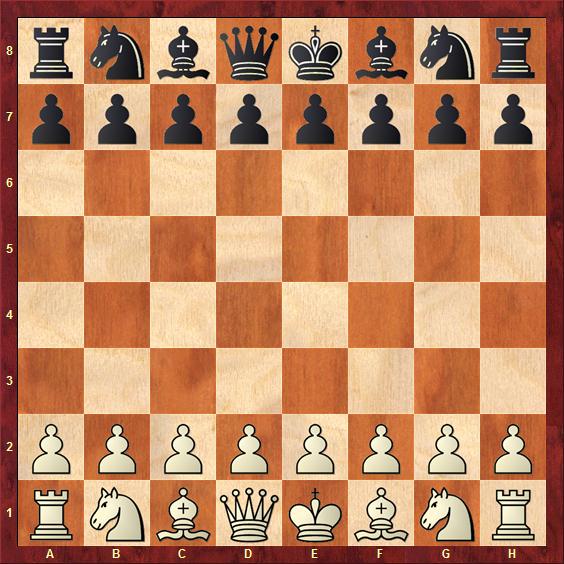 We will tell you the movement of each chess piece. Each side has a total of 16 pieces, of the 16 pieces there are 6 distinct pieces, the remaining 10 pieces are duplicates of the same pieces just operating on different starting squares, etc. The 6 distinct pieces are listed as follows: Pawns, Rooks, Knights, Bishops, a King and a Queen.

The Pawn is a piece that moves forward one square at a time. It captures enemy pieces diagonally one square at a time, much like in the game of checkers or draughts. For most of its play it is considered the least valuable of all of the pieces. There are 8 pawns allotted to each player at the start of the game. The Pawn carries a Chess Value of One point. The pawn can only move forward never does it move backwards. When the pawn starts out on its original square, it has the option of moving two spaces at once, instead of just one space. If the opposition's pawn for the white player makes it to the 4th rank and the White pawn is on its original square and the white player moves the pawn 2 spaces at this time the black player has the option to still capture this piece, the capture is called "en passant" which means "in passing". Note: an en passant capture must be completed on the very next move or the move will not be permitted.  This also works for White, if the black pawn makes it 5th rank and the pawn hasn't moved from its original position, the opposition has the option of capturing that pawn en passant. Note: after the pawn moves its 2 spaces it lands on the same rank, but on an adjacent file. The piece captures en passant by landing on the square as if the captured pawn just moved only one space!

If the pawn is able to make it to last rank, it gets promoted from a pawn to any piece that the player chooses, except for a King. Most people promote a pawn to Queen. Multiple Queens adds a new dimension to the game.

The Rooks are considered a major piece in the game of Chess. They start on the edge of the Chessboard. Rooks can move horizontally and vertically; north and south; east and west, on and on. The Rook can move as far as it can in the aforementioned directions as long as there is not another piece there. If an enemy piece is occupying a square that is in the Rooks "Line-of-fire" that piece can be captured by the Rook. Note: Once a piece is captured by another piece the capturing piece now occupies the captured piece's position.  Rooks are especially valuable in the middle and endgame phases of the game. The Rook has a Chess Value of 5 points.

The Knights are, by far, the most unique in appearance and in movement of all of the Chess pieces. Knights have a horse's head and move in what many people describe as an "L shape". The Knights is the only piece that starts its move on one color and lands on another color after every single move, with no exceptions. The Knight is the only piece that can threaten a piece, but can't receive the same threat from that threatened piece at the same time. Note: The wise and/or tricky use of your Knight can give you serious advantages over an opponent who doesn't use their knights as well. When 2 knights are paired-up, lookout! there may be some trouble ahead for his opponent. The Knight has a Chess Value of 3 points.

The Bishops, move diagonally across-the-board. If a Bishop starts on the dark squares, it remains on the dark squares and vice-versa for the lighter squares, too. Each Bishop has the ability to cover 50% of the Chessboard or 32 of the 64 squares on the board. When Bishop works in tandem with another piece or multiple pieces they can "rock-your-world". The Bishop has a Chess Value of 3 points.

The Queen is by far the most versatile of all of the Chess Pieces, it combines the moves of the Bishop and the Rook. The Queen has no restrictions of movements in comparison to the other pieces. In the endgame strategies, the Queen usually displays its power. The Queen has a Chess Value of 9 points.

The King is the most powerful piece, his capture represents the end of the game. The King duplicates the Queen's moves, but only one space at a time. The King could have as a many as eight different possible moves as long as it doesn't stand on the edge of the board. The King has a Chess Value of one million points, lol.

The objective of the game:

Chess is played by two opponents who alternately move chess pieces according to very specific rules with the objective being to trap the opponent's King (Checkmate) so that escape is not possible.

If the game is such that neither one of the opponents can achieve a "Checkmate" then the game is considered a draw. 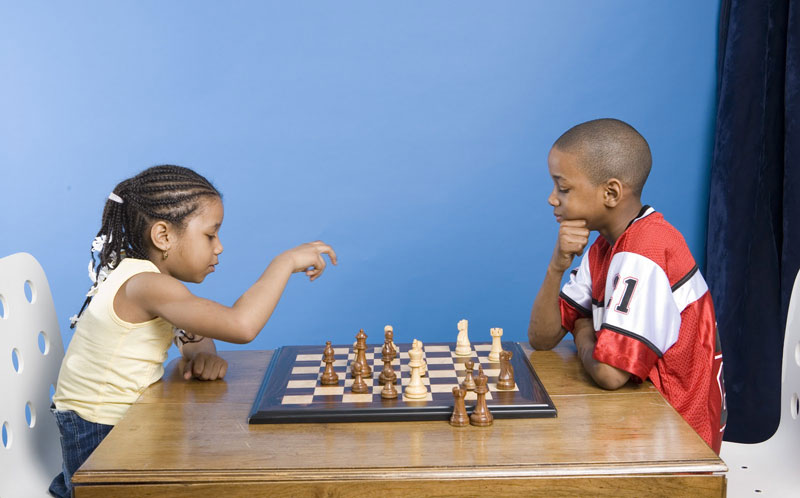