Chess Opening
A chess opening or simply an opening refers to the initial moves of a chess game. The term can refer to the initial moves by either side, White or Black, but an opening by Black may also be known as a defense. There are dozens of different openings, and hundreds of variants. The Oxford Companion to Chess lists 1,327 named openings and variants. These vary widely in character from quiet positional play to wild tactical play. In addition to referring to specific move sequences, the opening is the first phase of a chess game, the other phases being the middlegame and the endgame.

Opening moves that are considered standard (often catalogued in a reference work such as the Encyclopedia of Chess Openings) are referred to as "book moves", or simply "book". Reference works often present move sequences in simple algebraic notation, opening trees, or theory tables. When a game begins to deviate from known opening theory, the players are said to be "out of book". In some opening lines, the moves considered best for both sides have been worked out for twenty to twenty-five moves or more. Some analysis goes to thirty or thirty-five moves, as in the classical King's Indian Defense and in the Sveshnikov and Najdorf variations of the Sicilian Defense. Professional chess players spend years studying openings, and continue doing so throughout their careers, as opening theory continues to evolve. Players at the club level also study openings but the importance of the opening phase is smaller there since games are rarely decided in the opening. The study of openings can become unbalanced if it is to the exclusion of tactical training and middlegame and endgame strategy.

A new sequence of moves in the opening is referred to as a theoretical novelty. When kept secret until used in a competitive game it is often known as a prepared variation, a powerful weapon in top-class competition.

Whether they are trying to gain the upper hand as White, or to equalize as Black or to create dynamic imbalances, players generally devote a lot of attention in the opening stages to the following strategies:

Apart from these ideas, other strategies used in the middlegame may also be carried out in the opening. These include preparing pawn breaks to create counter-play, creating weaknesses in the opponent's pawn structure, seizing control of key squares, making favorable exchanges of minor pieces (e.g. gaining the bishop pair), or gaining a space advantage, whether in the center or on the flanks.

At higher levels of competition, for many years the main objectives of opening play were to obtain the better position when playing as White and to equalize when playing as Black. The idea behind this is that playing first gives White a slight initial advantage; for example, White will be the first to attack if the game opens symmetrically (Black mirrors White's moves).

Since about the 1950s another objective has gradually become more dominant. According to IM Jeremy Silman, the purpose of the opening is to create dynamic imbalances between the two sides, which will determine the character of the middlegame and the strategic plans chosen by both sides.[8] For example, in the main line of the Winawer Variation of the French Defense (1.e4 e6 2.d4 d5 3.Nc3 Bb4 4.e5 c5 5.a3 Bxc3+ 6.bxc3), White will try to use his bishop pair and space advantage to mount an attack on Black's kingside, while Black will seek simplifying exchanges (in particular, trading off one of White's bishops to blunt this advantage) and counterattack against the weakened pawns on White's queenside; both players accept different combinations of advantages and disadvantages. This idea was a doctrine of the Soviet school of chess.

A third objective, which is complementary to the previous ones and has been common since the 19th century, is to lure the opponent into positions with which the player is more familiar and comfortable than the opponent. This is usually done by transpositions, in which a game that apparently starts with one opening can reach a position that is normally produced by a different opening. 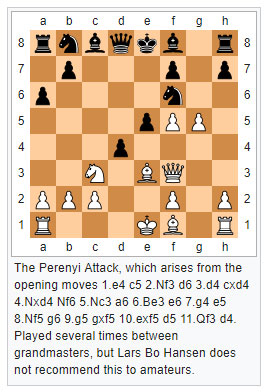 Most players realize after a while that they play certain types of positions better than others, and that the amount of theory they can learn is limited. Therefore, most players specialize in certain openings where they know the theory and which lead to positions which they favor. The set of openings a player has specialized in is called an opening repertoire. The main elements a player needs to consider in a repertoire are:

The main openings in a repertoire are usually reasonably sound, that is, they should lead to playable positions even against optimal counter-play. Unsound gambits are sometimes used as surprise weapons, but are unreliable for a stable repertoire. Repertoires often change as a player develops, and a player's advancement may be stifled if the opening repertoire does not evolve. Some openings which are effective against amateur players are less effective at the master level. For example, Black obtains active play in return for a pawn in the Benko Gambit; amateur players may have trouble defending against Black's activity, while masters are more skilled at defending and making use of the extra pawn. Some openings which are played between grandmasters are so complex and theoretical that amateur players will have trouble understanding them. An example is the Perenyi Attack of the Sicilian Defense (see diagram) which yields an immensely complicated and tactical position that even strong players have difficulty handling, and that is beyond the comprehension of most amateurs. 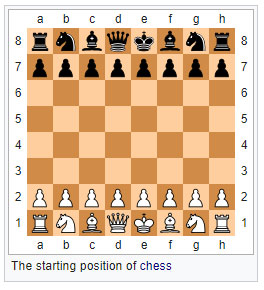